Queensland Raceway – Not a fan of the paper clip 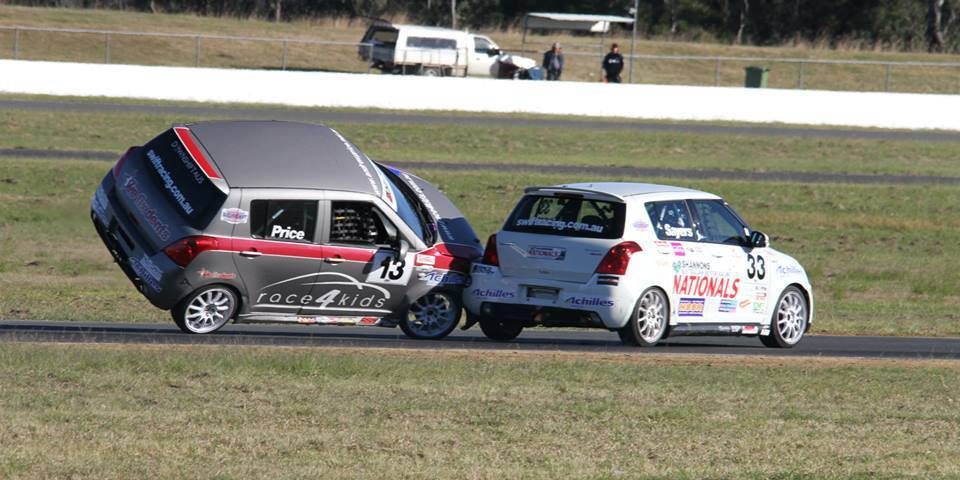 Firstly I would like to say a big thank you to We Fix Dents (Dent Link) for their help at this round. You’ll see why later.
This was a pretty tough round. All through practice, qualifying and Race 1 I really struggled with pace. Never quite being on the pace. I had gone into the round with really high hopes after a fantastic performance at Sydney Motorsport Park. We spent practice sitting back in 4/5th. Qualifying didn’t quite go so well though.

We made an improvement to the car and although it made it a touch faster it made it a real handful to drive resulting in an excursion through the infield and we also missed out on a tow. We ended up qualifying in 7th. The worst result we had for the year.

For Race 1 I found a reasonable balance in the car and managed to work my way back up to 5th for the night Race. The night Race was a pretty cool event. Much like Mallala although Queensland Raceway had less lighting. Our pace was now only just behind the fastest guys and things were looking up for Race 2.
I was a bit more confident with Race 2 although knew it was going to be a challenge with tough competitors in front. I was looking to make a strong start and take the fight up to the leaders from the beginning. All was going smoothly until Turn 4 & 5. I spotted a gap and unfortunately that gap was closed. Check out the sequence of photos from Nigel Davies.

After that the car was a mess to drive. We had clearly knocked the alignment out. After plummeting to the back of the pack with a wounded car I managed to fight my way back up to 6th position but lost touch with Callan and Rob while fighting with Shane Marshall.
I got the car back into the pits and tidied up the alignment and Chris Bridges from We Fix Dents went about tidying up the panel damage from the excursion through the bushes. I knew I would have to push hard to work to try and salvage what we could from the weekend. Starting back in 6th a fight was always going to be on my hands. A strong start saw me fighting with 3rd and 4th for the race however although I probably had a little more pace I was unable to make a move stick with a couple of small mistakes costing me vital opportunities to get past.

It would have to have been my toughest weekend yet. Coming off the solid result from Sydney I was expecting much more. However as they say this is motorsport. I would like to thank my sponsors Adaptronic, We Fix Dents (Dent Link) and Gold Coast and Brisbane Indoor Karting Centres for their support over the weekend and throughout the year.