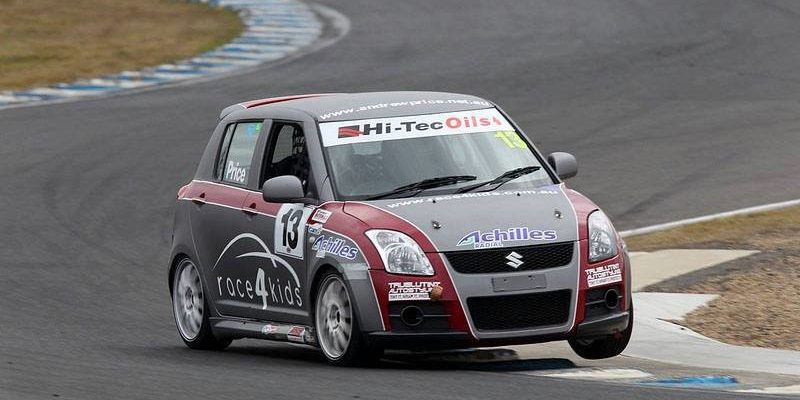 The Race 4 Kids Swift (with it’s new wrap from Trublu Tint) was dialled in from Session 1. I had never been to Sydney Motorsport Park except to go and attend World Time Attack. Turn 1 would have to be one of the best Corners in Australia for the little Swifts. Turning in at 195km/h and having to commit. Any lift off and you will end up in the wall. With lots of changes of direction, hard braking and elevation changes it would have to be my favourite track that we have travelled to so far.

Unfortunately we slipped off the top rung of Practice in Session 3 to sit just behind Ben Grice. I’m going to use the excuse that we were bedding in a new set of tyres on the rear. Anyway Friday ended on a really positive note and I was looking forward to Saturday.

Saturday morning arrived and Ben Grice and I were separated by just .06 of a second at the end of it and we had unofficially beaten the lap record by 1.6 of a second. Unfortunately it all started going down hill from there.

Qualifying was up next and drama started right away. On the Warm-up Lap, James Spicer sent his Swift into the wall backwards. Our session was cut in half and with just 4 or 5 laps to get a run in and running alongside the Amchamp cars it was any guess what would happen. On my first flying lap I was blocked by another of the Swift Series cars. I backed out of it and had another shot. The following lap I made a small mistake coming onto the front straight which cost me a fair bit of time but we had a time in. Next lap we were slowed by some of the approaching Amchamp cars then to finish it off on our second last lap I looped the car in turn 1. At 195km/h the rear end stepped out and although I almost caught it. It spat me out the other side through the edge of the gravel trap stopping just short of the tyre bundle.

Qualifying left us sitting in P5 for the first race on Saturday afternoon. We struggled we ended up in a battle with 4th, 5th and 6th as we were stuck out wide through turn 3 and unable to make up any places. It was an unfortunate race. I managed to secure 5th and caught the lead group of 4 cars but was unable to make a move in the last few laps. I was disappointed with the result but determined to do better the following day.

Sunday saw our Second and Last 1-Hour Enduro of the year. Starting back in P5 and with our race due to start 10 seconds after the AmChamp cars I knew I had 8 Laps before the quicker AmChamp cars started catching us. I felt confident that we could work our way up to the front and get a good result. I was right we had the pace to. After a few laps we were up in third. Coming into turn 2 Callan made a move down the inside and from out of no where I was tagged from behind. We ended up with the passenger side rear guard rubbing against the wheel.

Fortunately we were able to keep going but we lost almost 5 seconds to Callan and Allan in 3rd and 2nd. I fought hard and managed to get catch and pass Allan and Callan and made a small break. With about 15 minutes left I was on the hunt for Ben Grice. With about 8 Minutes left we had cut the lead down to 3 seconds and were catching Ben quickly. From the calculations performed by Matt Southwell my Race Engineer for the weekend. We were likely to catch Ben and have one lap to try and pass him.

However that didn’t happen. We received the Meat Ball for those of you who don’t know what the Meat Ball is. It is black flag with an orange circle in the middle. A mechanical black flag. I stayed out for another lap to give the crew an opportunity to work out what was wrong. I assumed we had a tyre failing or the rear bumper was coming off. I arrived in to the pits and the crew had no idea. We found out after a short stop that it was the exhaust that had fallen off a hanger.

We had been black flagged for an exhaust that wasn’t even touching the ground just hanging off the hanger on one side. The crew was not informed and we wasted valuable time in the pit trying to resolve it. Benny and the rest of the crew had it fixed quickly and I was back out on track but the damage was done. We had lost any chance of a podium and fortunately a few late Swift retirements saw us finish in 4th overall.

You have to look back at these weekends and try and disregard the negatives. A whole lot of coulda, shoulda, woulda. We had pace and the fastest car across the two days. I learnt more about qualifying with regards to picking your moments and place in the field to complete qualifying. Also that I needed to be more aggressive during short sprint races.