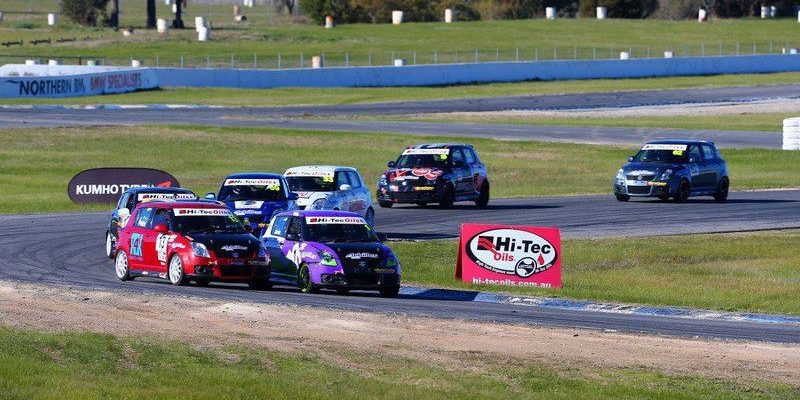 As the Title Suggests this was a good weekend. We ended up sitting on the podium in all three races. It wasn’t an easy weekend though!

Winton is a fairly long track (lap time wise) short with lots of on and off the accelerator. I carry around 30kg – 40kg on top of many of the other driver’s due to being relatively tall (and a little over weight at the moment) This track was always going to be a struggle with three hair pins and the cars never getting out of 4th gear.

The track is super abrasive and anything above freezing (which the track was in the morning) saw lap times drop off quickly. The key to the weekend as we quickly discovered was going to be conserving tyres even though we only had short 9 lap races.

Friday saw us miles off the pace. The long and the short of it was that Friday was pretty discouraging. We tried everything, raise the rear ride height, stiffen up the rear, soften the front and all the other possible changes I could think of to get rid of some understeer. We finished the day scratching our heads. We were sitting in 5th and we were just as quick as the fastest guys through sector 1. But we were losing almost .5 of a second through the middle sector and a few tenths out of the last sector (which was likely caused from a poor run out of the middle sector).

Saturday was much the same, we struggled but picked up pace as we got closer to getting the car setup right. We remained in 5th place for qualifying but started finding some very consistent pace through the whole of practice and qualifying. A very positive sign for the race but I wasn’t happy. I wanted to be a front runner so after talking with Greg Cox and my Crew Chief Terry Nixon we made a decision to make a big change.

Sunday rolled around and I had no idea what to expect with a strong field anything was possible. We knew we wouldn’t be the quickest off the start but we had hoped to remain strong towards the end while others faded.

Race 1 saw us starting 5th. With a solid start and managing to hold onto 5th with pressure from behind we settled into a rhythm and managed to stay in contact with Callan Sayers and Allan Jarvis in 3rd and 4th respectively. With about 4 Laps to go I surprised many (myself included) with making a dive under brakes to take Allan and Callan in the one corner while they were jostling for position. I then started on the hunt to try and catch Ben Grice and Luke Fraser. Unfortunately we ran out of laps but throughout the rest of the race we managed to pull them back. The changes we had made had improved the car significantly through the middle and final sector. We lost a little bit of pace through the first sector but the real passing opportunities were in the middle and final sector.

Race 2: Saw me with my first front row courtesy of a reverse grid start. Unfortunately a coming together between Allan and myself resulted in a broken front left strut. This hindered us and we slowly fell through the field. We fell back to 5th but managed to stay in touch with the front pack of 4 and although the car did not handle well as the others tyres started fading we managed to make some inroads. Half way through the race a huge accident involving Ben Grice and Callan Sayers occurred and some how through the mess I found myself sitting in 2nd Place chasing after Allan Jarvis 3.5 seconds up the track. We didn’t catch him but we did manage to cut over a second out of his lead in the closing laps while holding out Luke Fraser, James Spicer and Jamie MacMaster to finish 2nd my best result to date.

Race 3 was a corker. With everyone battling hard to get onto the podium it was always going to be a tough race. We had fixed the front shock but the car wasn’t handling quite as well as it should. I fell back to 5th after starting in 3rd. Unfortunately with Winton you start on the inside before a left right hander. In a class such as the Swifts it is very difficult to get in front of the car alongside. This leaves the car beside you with the inside run. We battled hard to keep Callan Sayers behind us and as the race wore on we started moving forward again. Firstly we picked off Luke Fraser we used up the doors a little bit to make the move but we wanted to try and catch James Spicer who was sitting in third in his first ever race (I wasn’t willing to let him stay there though).

We chased hard and managed to catch him on the final lap. Coming into the middle sector (three hair pins) we managed to make a dive under brakes we spent three laps side by side. Unfortunately out of the last hair pin I had the inside line. Not wanting to back out the car ran wide and James unfortunately ran wide as well. It wasn’t a clean move but we ended up on the Podium. We caught back up to Allan in second but did not have enough time to make a move.

Hard not to be happy with this weekend. We did lose out on a podium overall as there were three different race winners who just pipped us. However we were consistent and pushed hard the whole weekend. Never giving up. I learnt a lot regarding car setup and that there is more than one way to get a good result in a race other than just setting the fastest lap time. You need to be able to string together lap after lap.