You are here:
MotorsportTime Attack 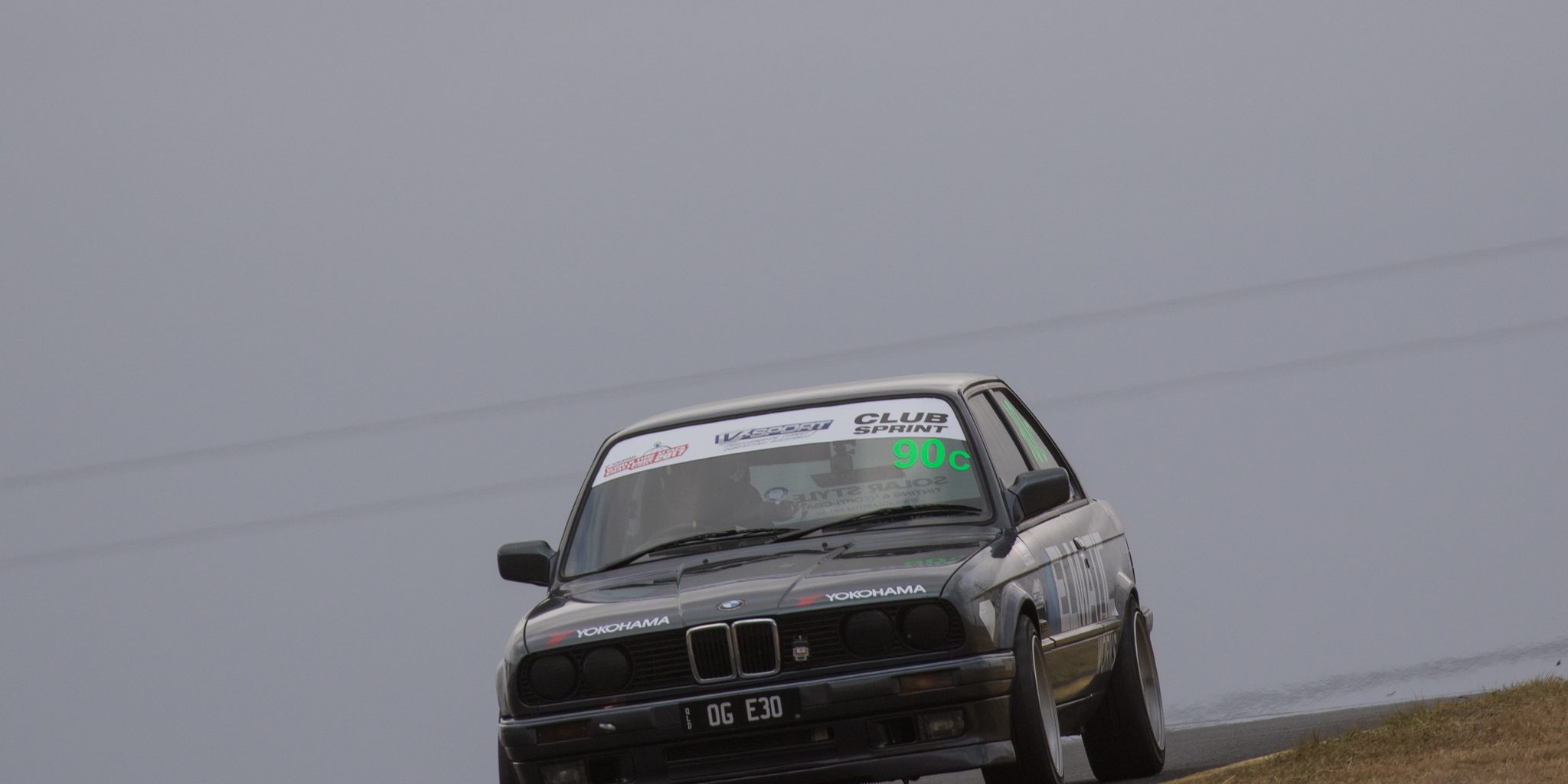 I barely know where to start with this re-cap. The lead up to the event was ridiculous. Keeley Motorsport – Facebook Page had been preparing my Audi – Facebook Page. Unfortunately it just didn’t happen, partially through lack of budget (although we could have got it there in some state just not as we had planned) and partially through some companies failing to deliver products in time.

Deciding to run the BMW

It was about 3 weeks out when we decided to run the Elmatic Works BMW E30 – Facebook Page. It wasn’t really a front running car, in fact we were just hoping it wouldn’t come last. It had never been tested, had been a bare shell a few months back and had been my girlfriend’s street car project. We had it running 2 weeks before hand and had Eleanor take the car to Morgan Park where I did some driver training work with her at one of Paul Stokell’s track days – Facebook Page. The day was wet so we didn’t really get much testing in it and I didn’t get a chance to drive. The car went back Brisbane and Eleanor and Matt finished preparing the car. Big Tread Tyre & Auto – Facebook Page, gave the car a wheel alignment.

The lead up for me was really just work, it’s not an interesting story at all. Work had turned in to a nightmare. My amazing partner along with Keeley Motorsport and Elmatic pretty much prepped the car for me. The day before I was due to leave, well actually the day I was originally supposed to be leaving (we pushed leaving date back a day.) I was up in Mt Isa about 1900km from Brisbane and 2400km to Sydney working. I caught a flight back and arrived back in Brisbane at almost 10pm. I rushed to pick up the trailer, and started loading up the tools, spares etc.

With 3 hours sleep (about the most we had for most of that week) we left for Sydney Motorsport Park on Thursday. The dramas continued with the brand new trailer we were using cooking the brakes, stopping at Currumbin Trailer Parts and Repairs  place they fixed it as best they could and we continued on. They wouldn’t take our money and stopped what they were doing to help for a good 30 minutes. If you guys need any trailer stuff please go and see them. We continued the trip down and made it into Sydney at 8pm. Dropped the trailer and car, prepared the pit bay (by that took everything out of the car and dumped it next to the car) and checked into our accommodation. Our accommodation was amazing and by that I mean the Ibis Budget Wentworthville was more akin to a prison sentence than comfortable accommodation but for all we cared we just wanted to sleep. Matt, Eleanor and poster boy Kurt made the trip down with me to run the car.

Thursday was practice day, for everyone but us. Friday was our first day in really giving the car a test. We were first out and still had to complete scrutineering and Driver’s Briefing. Fortunately the Driver’s Briefing is the easy part. We failed scrutineering first up, I may have missed the required 4 Point harness, V- Sport supplied us with one and Keeley Motorsport fitted it for us along with an extinguisher. We got it back to scrutineering, passed as we were heading out for our first session. Fortunately we had time to check tyre pressures but not enough time to remember to grab our dorian (sensor for lap times) from the Control Tower. Fortunately the awesome guys up in the tower still managed to record our times (not that they were fantastic.

It was my first time driving the car, and we got about a lap maybe two before the session was red flagged. The car felt good however with traffic I never really had a chance to test the car out. The second session ended just as quickly, gaining some confidence in the car and on our first flyer, coming on to the front straight I lost all power, accelerator was moving, the car wasn’t accelerating, I couldn’t work out why, it idled fine, it wasn’t making any funny noise. It just wasn’t accelerating. Pulled into pit lane, loosened my straps and noticed that the reason it wasn’t accelerating was that the accelerator had fallen off.

Third Session, again growing more comfortable with the car however we discovered a further issue. We had used an upgraded tank in our E30 that wasn’t supposed to have a problem with picking up fuel however even with a half full fuel tank we came across fuel surge issues and I thought I had noticed the car pulling timing. Matt got to work and by the end of the fourth session after some testing we had identified the issue. Matt wrote a new tune for the car Friday night and loaded the tune Saturday morning. Friday was mostly just solving small issues, it wasn’t an overly exciting day as far as lap times go but we made a heap of progress.

We still hadn’t really had any sleep but 5 hours was the most we had all weekend so I felt some what decent. I now felt confident in the car and started pushing into it, First session out we set a new fastest lap, the problems with pulled timing was solved, a full tank of fuel fixed the fueling issue. With more confidence and pace I started reaching and searching the cars limits, the E30 is a fantastically flexible car, with no aero and no power we were able to still make up time on the midfield cars through the corners and had a blast doing it. Playing with the cars attitude through, throttle, brake and steering was fantastically predictable once you developed the confidence to trust the old chassis’ movements.

Turn 1 was now just a lift off, I had raised the front suspension when I was not confident with the rear end moving around however that now meant the car wanted to push a little on corner exit. Especially through Turn 1, 6 and 7 (14 on the full track). The steering also felt like it was binding, we tried working out what the issue was but had been unable to do so. It turned out to be the steering linkage touching the exhaust on high loads.

Session 2 I cut a second off the lap times before the fuel issue struck again, we didn’t fill it up enough, trying to cut it too close with weight savings. We had been on an even better lap before the issue struck and we were balked by another car. Here is the laps from session two though.

Session 3, our final for the event, we never had a chance of making the Top 5 unless it rained the whole weekend. Our little E30 performed admirably but had no chance against the faster cars. In the final session the track or car setup seemed to move away, we lost a few km/h through turn 1 and most other portions of the track and the car seemed really loose. It had been drizzling throughout the day so it could have been possible that it drew oil up from the track and made it a little more slippery. We ended the event with a 1.51.9 and we didn’t finish last.

There are so many people that I need to thank, some I have mentioned already, Shannon Fleming from Solar Style Window Tinting for helping us get the car there. Warney from DJ’s Mobile Machining. There are going to be others that I have no doubt forgotten but please realise that  I am still forever grateful for all of the help in reaching World Time Attack 2017. For lap specific and driving specific summary please check out my next article.